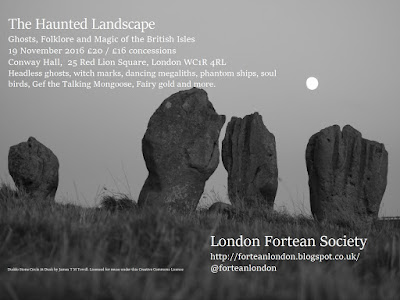 As the days darken the London Fortean Society explores the folklore, ghosts and curses of the British Isles with the one-day symposium The Haunted Landscape. Authors, experts and researchers discuss ghosts, strange beasts and magic.

From a talking mongoose to soul birds, moving megaliths in the landscape to witch marks in old buildings; to fairy lore and ghosts. Join us at Conway Hall to learn that the green and pleasant land we abide in has a dark, strange and chilling other side.

Whatever Happened to the Headless Ghost?
Once the headless or Acephalous Ghost was a staple of stately home haunts, and now is never seen. Where might the idea have originated in British folklore? And why do we no longer need to see them?

Roger Clarke grew up in a haunted house and was educated at Oxford University before becoming a film journalist for The Independent. His book 'A Natural History of Ghosts' was published to wide acclaim in 2012 and has this year been translated into Spanish and Japanese, as well as being published in three formats in the USA.
﻿﻿﻿﻿
The Museum of Witchcraft and Magic
The Museum of Witchcraft was founded in Boscastle, Cornwall in 1960.  It explores British magical practice, making comparisons with other systems of belief, from ancient times to the present day. Photographer Sara Hannant and museum director Simon Costin reveal highlights from their forthcoming book ‘Of Shadows: One Hundred Objects from the Museum of Witchcraft and Magic’.


The Haunted Shores of England
Sophia Kingshill, author of The Fables Coast and Mermaids, takes a coastal survey of marine spectres, phantom ships, soul birds, and controversial creatures. The coastline of the British Isles plays host to an astonishingly rich variety of local legends, customs, and superstitions.

Druids, Dancers and Devils: The Folklore of Britain's Megaliths
Archdruid's palaces, ancient British racecourses, and countrygirls who danced for too long: this paper will trace the origins of the fascinating folklore that relates to Britain's megalithic monuments.  Joanne Parker is a Senior Lecturer in Victorian Literature in the Department of English at the University of Exeter. Her publications include Britannia Obscura: Mapping Hidden Britain and Written on Stone: The Cultural History of British Prehistoric Monuments.

A Mongoose in the Landscape
In 1931 the inhabitants of an isolated Isle of Man farm began to report extraordinary phenomena. The Irving family claimed that a small animal had appeared to them, manifesting speech, clairvoyance, invisibility and other extraordinary powers. What became known as the Gef the Talking Mongoose case swiftly became a media sensation – the subject of psychic investigations, court cases, and books – yet is now largely forgotten.
Christopher Josiffe is the author of a forthcoming book on Gef the Talking Mongoose from Strange Attractor Press.

The Blackley Boggart and its distant cousins
This talk will explore the folklore of the Boggart, defined by Katharine Briggs as a 'mischievous Brownie', most common in Lancashire and Yorkshire. It will focus primarily on the playful - and, at times, malicious - namesake of Boggart Hole Clough, an inner-city park in Manchester, tracing the folktales surrounding it from the 1820s to the present day, and setting them within the context of countrywide Boggart traditions.
Dr. Ceri Houlbrook is a folklore archaeologist, whose primary interests include the materiality of post-medieval magic and ritual, contemporary folkloric practices, and the heritage of deposits and assemblages.

Fairy Gold
Who wouldn’t be tempted by fairy treasure? The bold thief succeeds, sometimes, while the schemer is outwitted; the miser is punished, and the industrious rewarded. In hollow hills and beneath old trees the gold awaits, only to become dry leaves in the wrong hands. Unvalued by its owners, it exists only as the instrument of their power over mortals. How different from our own currency...
Jeremy Harte is a researcher into folklore and archaeology, with a particular interest in sacred space and tales of encounters with the supernatural. He is the author of English Holy Wells: A sourcebook and Explore Fairy Traditions.

Cultural anxieties and ritual protection in high status early modern houses
Recent archaeological work at the Tower of London and Knole, Kent has shown that the fear of evil, instilled in ordinary people during the early modern period, was expressed through the creation of ritual protection marks and spiritual middens intended to defend buildings from malignant forces.
James Wright is a doctoral student at the University of Nottingham. He specialises in record-ing and analysing historic standing buildings.