Earlier this year, its influence may have led to the attempted murder of a child by other children. A creature of pure fiction, drawing blood.

Cat Vincent takes a look at the origins, evolution and implications of this most modern of monsters. Cat is currently a regular columnist at Spiral Nature (a series called ‘The Hype’) contributing editor to The Daily Grail, and have been published in two volumes of their Fortean journal Darklore.
Posted by Scott Wood at 11:34 1 comment:

From aliens and monsters to ghostly paintings, we interpret the unusual in our


world according to what we find familiar in our culture. Explore some examples and explanations of the weird and wonderful that may say more about our society and our brains than about the supernatural.

Paolo is a natural history curator at the fantastic Horniman Museum, responsible for the fossil and bone collections. There may well be bones. His personal blog is Zygoma.

Join London Fortean Society host and author of London Urban Legends: The Corpse on the Tube Scott Wood for more stories from the City and the East End stopping off at sites of ghosts, lost tube stations, witchcraft, the false history of 'London Bridge is Falling Down', why Jack the Ripper may just be an urban legend and of London’s most bigoted monument.

Meet 7.30pm on the south-side of London Bridge by the big concrete spike.
Walk ends at the haunted Bell pub, Middlesex Street E1
Posted by Scott Wood at 11:10 1 comment:


The naïve and the pedantic and the bizarre and the grotesque and the sincere and the insincere, the profound and the puerile.
The Book of the Damned 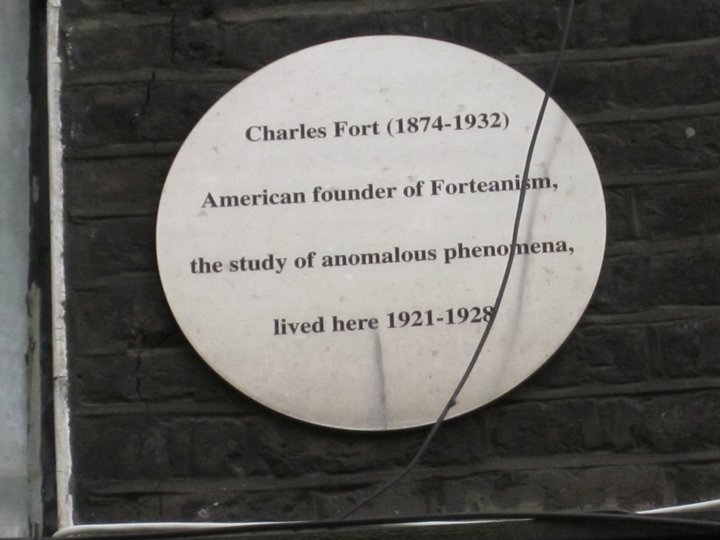 An (even more) informal gathering (than usual) to celebrate the birthday of Charles Fort, the american writer who inspired the idea of being fortean. (Although others coined the term and started all the societies.)

Beginning at 7.30pm on Wednesday 6 August outside 39A Marchmont Street, Fort’s home in London, with a reading and toast (ale and cheese optional).

Followed by a drink in his honour at the Marquis Cornwallis on Marchmont Street, a "Bloomsbury pub of grandiose proportions".

I am a collector of notes upon subjects that have diversity—such as deviations from concentricity in the lunar crater Copernicus, and a sudden appearance of purple Englishmen—stationary meteor-radiants, and a reported growth of hair on the bald head of a mummy—and "Did the girl swallow the octopus?
Wild Talents
Posted by Scott Wood at 00:30 1 comment: