﻿
From hoax hip-hop stars and haunted houses to military deception, fake news, cancer myths and a joke that may have started World War III join the London Fortean Society and Conway Hall Ethical Society for an April Fools Day of hoaxing, deceit and unreal things. Some may be charming, others are terrifying.

1st April is the traditional day for hoaxing and japes but deception and deceit riddle everyday news and communication.

The Hoaxes of Crass. Penny Rimbaud

Fake News
What are the consequences of fake news now being as easy to access as genuine reporting? It is pranking, propaganda or a reflection of the publics already jaundiced world view?


Padraig Reidy of Little Atoms chairs a discussion on fake news; what it is, where is comes from, what is means for communication and informed democracy in the twenty-first century?  The panel will include James Ball, BuzzFeed UK Special Correspondent and author of Post-Truth: How Bullshit Conquered the World and Peter Pomerantsev, author or Buy Nothing Is True and Everything Is Possible: The Surreal Heart of the New Russia.


Ghostwatch: The scariest TV show ever made?

On Halloween 1992 BBC1 viewers watch a chilling live transmission from a haunted house that went terribly wrong.  Sarah Greene. Mike Smith and Craig Charles were terrorised. Michael Parkinson ended the program far worse than that.  The drama, depicted as a documentary, was frightening, controversial and not shown for another ten years afterwards.


Ghostwatch writer Stephen Volk and director Lesley Manning show excerpts and discuss the making, impact and influence of Ghostwatch on its twenty-fifth anniversary.


Orion: The Man Who Would Be King
From Jeanie’s Director’s statement: “A roller coaster tale of the Nashville music scene in the wake of Elvis Presley’s death, taking in deception, a quest for success, a search for identity and ending in brutal and tragic murder. […] Even if you’ve never heard of Orion, you probably know about the ‘Elvis is Alive’ myth. What I uncovered was that the story of Orion is the story of how that myth got started.”


The Great Hip-Hop Hoax
Californian hip-hop duo Silibil n' Brains were going to be massive. What no-one knew was the pair were really students from Scotland, with fake American accents and made up identities.


The Hoaxes of Crass: The Thatchergate Tapes and Loving Magazine.
1980s anarcho-punk band Crass were more than a shouty protest band. Their 1983 ‘Thatchergate’ tape supposedly caught Margret Thatcher and Ronald Reagan discussing Europe becoming the US’s battlefront against the USSR and the sacrifice of HMS Sheffield during the Falklands war.

The hoax was a pre-Cassetteboy prank of spliced tape that the CIA thought was by Soviet 'produced to destroy democracy as we know it'. The hoax did not set-off World War Three.

In 1981, in the build up to the wedding of Prince Charles and Lady Diane, Crass convinced the magazine Loving to carry a free flexi disc of the song Our Wedding.

Ex-Crass Member Penny Rimbaud described the lyrics as “frightful, banal shit about the social fantasy of marriage” that the magazine fell for “hook, line and stinker”.
Join Penny as he discusses these hoaxes.

The news and internet are forever full of fake cancer causes and cure offering simplistic solutions to a complex and terrible illness. The 'alkaline diet' can prevent cancer Sugar can cause cancer. A carbohydrate-free diet can throttle cancer. Homeopathy, cannabis oil and natural remedies can treat cancer. Household electromagnetic radiation causes cancer.
Vaccination has been hated and feared since at least 1867 and the formation of the Anti Vaccination League and has had a recent resurgence following the false autism scare of the MMR vaccine.

Where is the truth amongst the myth?


Dr David Robert Grimes is a physicist and cancer researcher at Oxford University. He was a joint winner of the 2014 John Maddox Prize for Standing up for Science.


Magic, Deception and the Abuses of Enchantment
Mark Pilkington looks at two formerly secret documents, published six decades apart, that reveal the methodologies of psychological manipulation and deception practised by American and British intelligence services. “The Art of Deception, Training for a New Generation of Online Covert Operations”, an internal presentation for the UK’s GCHQ, was leaked by whistleblower Edward Snowden earlier this year, while “The Exploitation of Superstitions for Purposes of Psychological Warfare” was published by USAF’s RAND Corporation in 1950.


The similarities between the two papers demonstrate that while the world we live in has changed dramatically in the intervening years, the human mind, and the techniques for manipulating it, have remained very much the same; both papers discuss the exploitation of belief systems and fortean phenomena.
Mark is the author of Mirage Men (2010, now a feature documentary) and runs Strange Attractor Press.


7.45pm Thursday 27 April 2017
This event has now sold out, sorry. All being well we shall run this event again in the autumn.
The Bell, 50 Middlesex Street, London E1 7EX.
Train and Tube: Liverpool Street.
Tube: Aldgate, Aldgate EastFacebook page

﻿﻿﻿
How does it feel to live in a ‘haunted home’? How do you negotiate living in a home which might be ‘co-habited’ by the strangest form of stranger?


Geographer Dr Caron Lipman decided to find out through a series of interviews with inhabitants of ‘haunted homes’ in England and Wales – all of whom had experienced some form of ‘uncanny’ event.
Caron will offer some examples and insights from her case studies, describing how such experiences are interpreted, how far the experience of uncanny events challenges existing beliefs (or non-beliefs) in ghosts, and what these events reveal about the domestic interior.

7.45pm Thursday 27 April 2017
This event has now sold out, sorry. All being well we shall run this event again in the autumn.
The Bell, 50 Middlesex Street, London E1 7EX.
Train and Tube: Liverpool Street.
Tube: Aldgate, Aldgate EastFacebook page

Everything You Know About Science is Wrong

Think that nothing can travel faster than the speed of light? That Darwin was the first to

put forward a theory of evolution, or that Watson and Crick discovered DNA?

Former scientist and editor-at-large of Londonist Matt Brown picks apart some of the best known 'facts' about science, drawing on his book Everything You Know About Science is Wrong. Find out why your kettle never boils at 100 degrees, how no astronaut has ever experienced zero gravity, and several reasons why you may not be who you think you are. 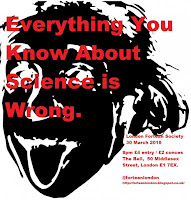 
7.45pm Monday 27 February 2017
This event has now sold out. We are sorry if you did not get a ticket.
The Bell, 50 Middlesex Street, London E1 7EX.
Train and Tube: Liverpool Street. Tube: Aldgate, Aldgate East
Facebook page 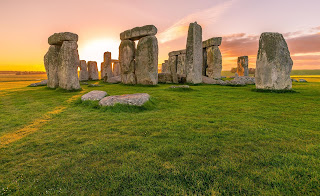 Without writing, indigenous elders memorised a vast amount of factual information on which survival depended both physically and culturally: knowledge of thousands of animals and plants, astronomical charts, vast navigation networks, genealogies, geography and geology … the list goes on and on. How did they remember so much? And why does this explain the purpose of ancient monuments including Stonehenge, Easter Island and the Nasca Lines? Can we use these memory methods in contemporary life?

This talk will focus on the transmission of scientific and practical knowledge among small-scale oral cultures across the world, drawing on Australian Aboriginal, Native American, African and Pacific cultures. 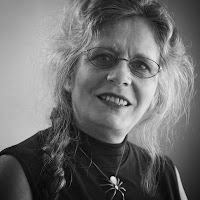 Dr Lynne Kelly, author of The Memory Code, will explain the exact mechanisms used and why this explains the purpose of many enigmatic monuments around the world. We have a great deal to learn from the extraordinary mnemonic skills of indigenous cultures.

7.45pm Monday 27 February 2017
This event has now sold out. We are sorry if you did not get a ticket.
The Bell, 50 Middlesex Street, London E1 7EX.
Train and Tube: Liverpool Street. Tube: Aldgate, Aldgate East
Facebook page
Posted by Scott Wood at 11:07 1 comment:

In October 2016 the UK was terrorised and fascinated by the Killer Clown craze. Fear of them not only dominated newspapers but crept in to the public consciousness with rumours and stories being shared on social media and in school playgrounds.

Scott Wood, host of the London Fortean Society and author of London Urban Legends: The Corpse on the Tube attempts to dissect these clowns to see what they and their myths are made of. He will look at the origins of the scares from hoaxed to guisers to earlier mythical terrors such as Spring-heeled Jack and the Chelsea Smilers.